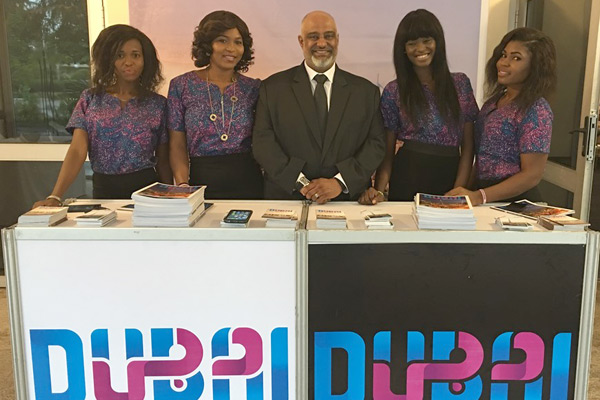 AFH officials at the road show in Nigeria

Arabian Falcon Holidays (AFH), the largest independent timeshare player in the Middle East, has concluded a successful participation in the Nigeria roadshow organised by Dubai’s Department of Tourism and Commerce Marketing (DTCM).

This is in line with AFH’s thrust to partner with the government in promoting Dubai as a leisure destination among African tourists.

Africa represented 5 per cent of the total inbound tourism source markets of Dubai in 2015 and the potential to develop this segment appears lucrative. With 201,000 Nigerian visitors last year, Dubai continues to focus on this country as one of the key markets in Africa.

Mohannad Sharafuddin, chairman and chief executive officer of AFH, said: “The DTCM’s roadshow in Nigeria was an opportune strategy to promote and position Dubai as the world’s premier tourist destination. It also provided the platform to highlight timeshare as an ideal choice that caters the accommodation requirements of Nigerian family holidaymakers. We are overwhelmed with the response we received in Nigeria since it is an extremely important market for us.”

The timeshare industry contributes greatly to tourism receipts as it encourages repeat visitors and tourist spending. In 2015, the total sales of AFH alone stood at Dh88 million ($24 million).

According to the latest AFH Economic report, the timeshare market in Dubai is expected to witness exponential growth and will contribute more than Dh14 billion ($3.81 billion) to its economy, driven by an expected 25 million visitors, by 2020.

A study conducted by Ernst and Young for the American Resort Development Association (ARDA), a trade body representing the vacation ownership and resort development industries, shows that the US timeshare industry contributed an estimated $68.7 billion in consumer and business spending to the national economy in 2013.

“These areas are the major cities of Nigerian outbound travellers who are the target market for timeshare,” Sharafuddin added.

Stella Obinwa, regional director International Operations – Africa of DTCM, said: “This roadshow allowed Dubai-based companies to directly interact with travel operators and travel agencies in Nigeria, pursue new contracts, and develop stronger business ties that will yield mutually beneficial and strategic partnerships. We believe this activity is instrumental in establishing Dubai as the preferred destination of holidaymakers from Nigeria.”

Sharafuddin said: “We look forward to being part of DTCM’s future roadshows. We have noticed that such events backed by government institutions generate trust and confidence among the participants and attendees. This kind of initiative shall pave the way to attract more tourists and to accomplish the vision of Dubai to attract 20 million tourists per year by 2020.” - TradeArabia News Service